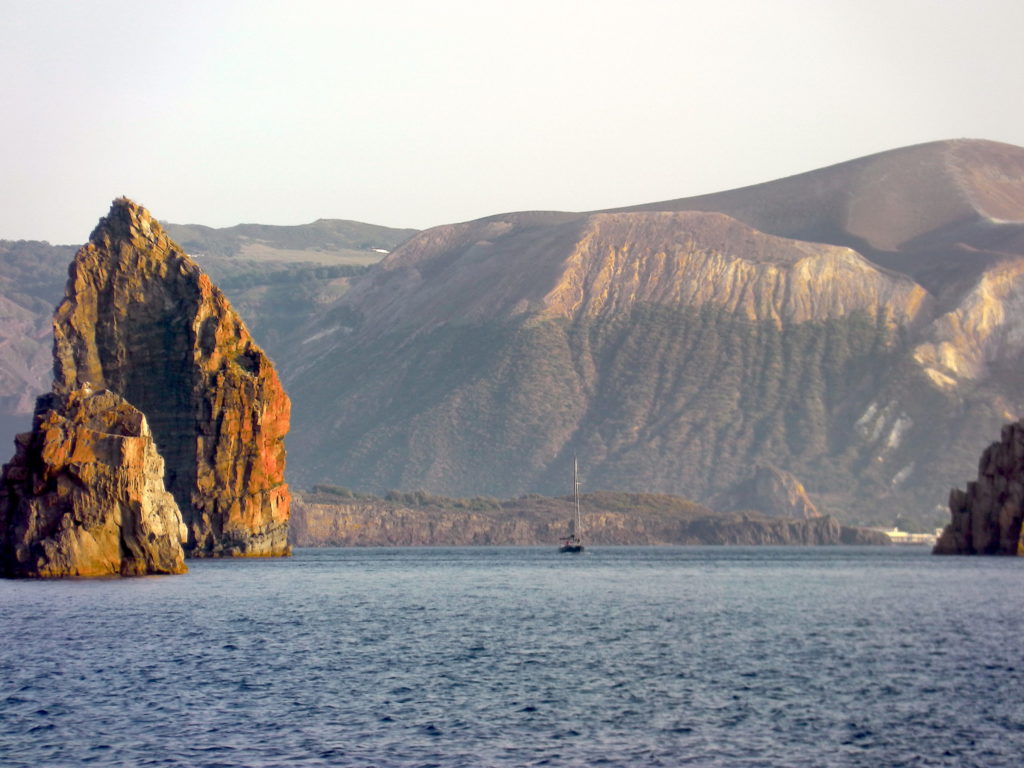 The week as it was:

Fantastic! What a great week in stunning scenery and scorching heat for HPYF 2012. Congratulations to Colin and his crew for a well deserved victory. The Ford was
not favourite to win in Italy, but fit a Massey-rati engine and it’s a different story! It was an historic victory which also saw the British beat the Dutch
on the water. Even Duncan’s experience during HPYF 2012 could not beat the dynamic fired up enthusiasm of Colin and his merry men. 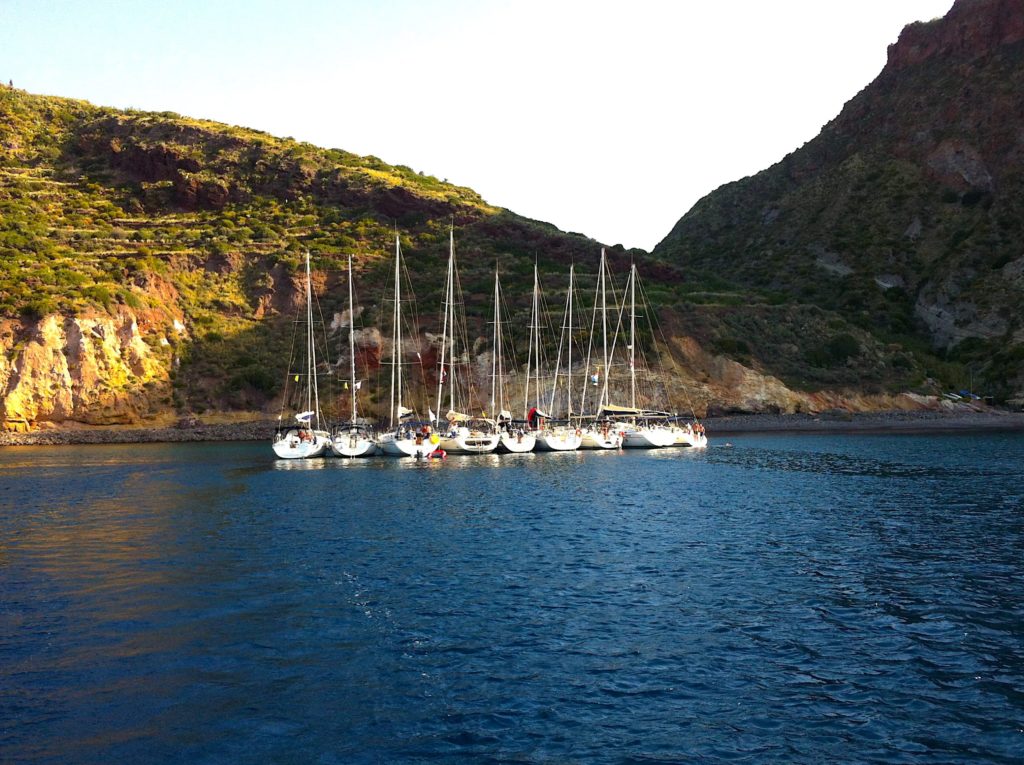 After the sail-rip drama that saw them miss out on the Stromboli leg, they never looked back, except to see everyone in their wake! It wasn’t quite
like that as there were always boats in front but they were slower on handicap. 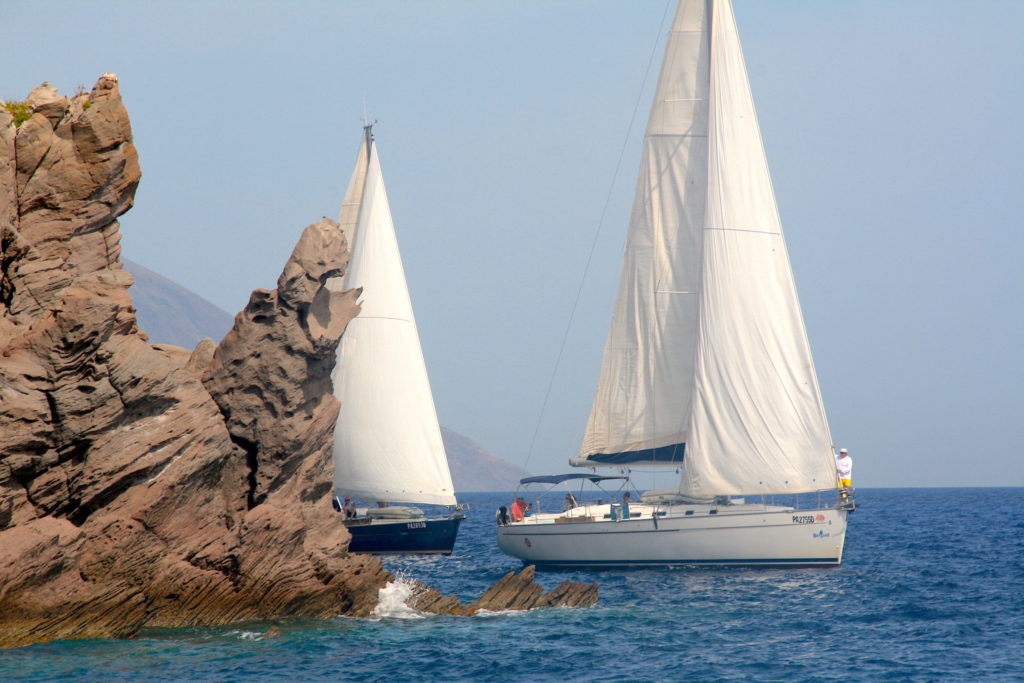 The week started in Palermo when many of us arrived on Friday, bleary-eyed from the early flights. Most of us took the opportunity for a good
sleep before the main event. First was the welcome party in La Casa di Nanna, hosted again by the Dutch. Many thanks to Sasha for getting everyone
transferred without apparent hitch and it was fantastic to see all the crews mixed together right from the off. 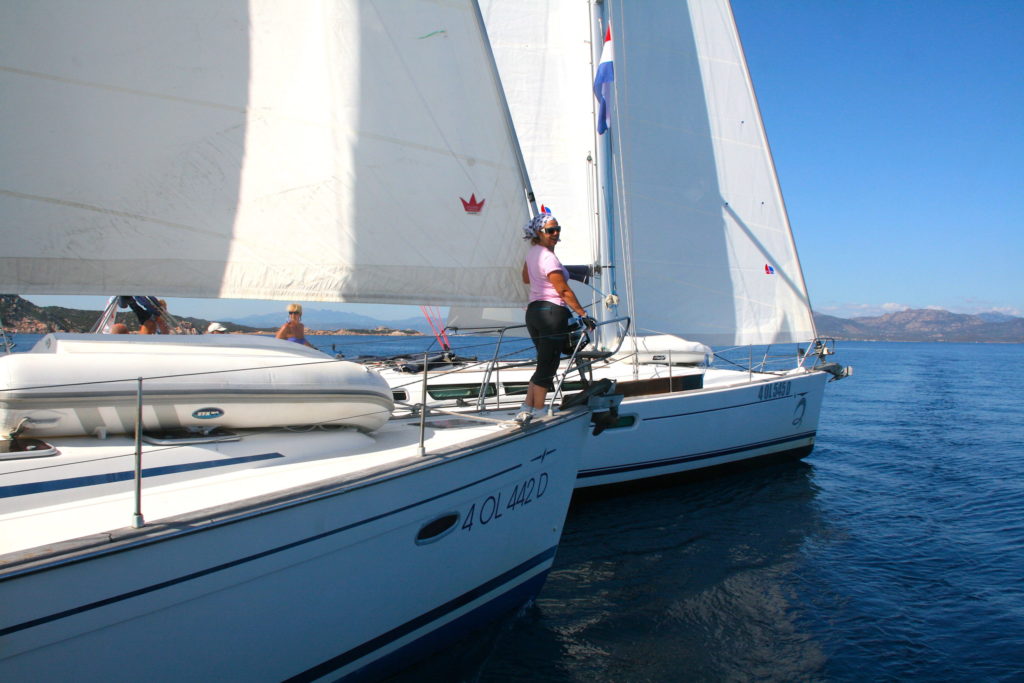 Sunday’s course (2 to 6 on the chart) took place in fading wind strength and was eventually finished without anyone crossing the dramatic finishing
line of the two La Formiche pillars of rock. Overnight was in the calm bay just north of Pta. Levante with views to the south of the Gran Cratere
smoking on Vulcano. Despite the lack of wind the enthusiasm on board the Senza Direction boat caused a large rip in the mainsail and a return to
Portorosa for repairs.

Monday’s wind was brief and insufficient for a race so the fleet motored to Isola Panaria with a swim stop on the NE coast of Lipari (pictured) and
between the islands of Bianca and Nera where the strong sulphur aromas come from the bubbling seabed. The surface was dotted with small floating
rocks of very light pumice. Overnight, we were on buoys near Pietro Pier on the east side of Panarea. Quite a shock to find the moorings were insufficient
and at least one yacht found herself floating off during the night. Fortunately there were no damages.

Tuesday’s race was a short one (2 to 7 on the chart) to ensure another result was “banked”. In SE winds, the race started NE of Bianca which formed the
upwind mark, rounded to starboard, Basiluzzo to port with a finish a few millimetres off the rock west of the island. Then it was a long motor to Stromboli,
along the west coast to see the smoking volcano. Mooring overnight was just south of Pta. della Lena by the black beach. Some walked to the top of the
volcano and back, while we sailed to the N W c o r n e r o f Stromboli after dark. After an hour drifting and gazing at the lava g l o w , w e s t a r t e d motoring
back when a huge eruption lit up the sky and drenched the slopes below the crater with glowing lava that slowly dimmed for 10 minutes before another
similar eruption occurred. Spectacular and well worth the excursion. 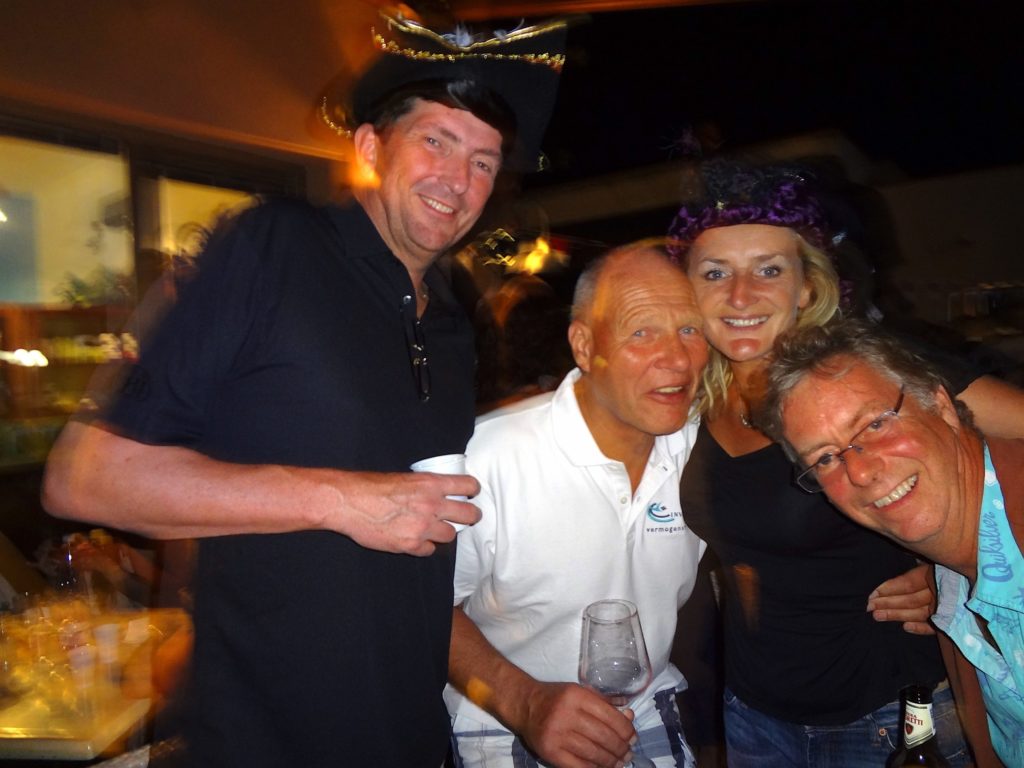 Former Commodore, Martin Suter, won the 4th race of the week (9 to 11 on the chart). The race, held on Thursday after a siesta in the delightful
anchorage SW of Pta. Perciato, took the fleet from a conveniently placed lobster pot SW of the southern tip of Salina, to finish inside Pietra del Bagno,
on the west coast of Lipari. The fleet sailed to Porto di Ponente where we rafted up for the Roux gourmet evening with live music by the Roux/Rouw
twins and the High Point choir.

Friday’s course (4 to 6 on the chart) was especially tricky with a north-westerly wind and a long southerly leg to Portorosa. The solution was to drop
Daniele in the dinghy for use as our up-wind mark. It was all a bit rushed after dramas that saw smoke coming from Jackie’s saloon necessitating towing
her to the start. Fortunately Daniele survived the start and we recovered him before racing to Portorosa to check on the dinner and prize-giving. The
race was kindly finished by Carolyn’s yacht stationed on the line between the two capes, Calava and Milazzo. Colin’s win, sealed his team’s overall
victory for the week. The week concluded at the prize-giving party, which, after difficulties with transfers from the marina, was fully appreciated
once the beautifully presented dinner s t a r t e d , followed by the disco by the beach. 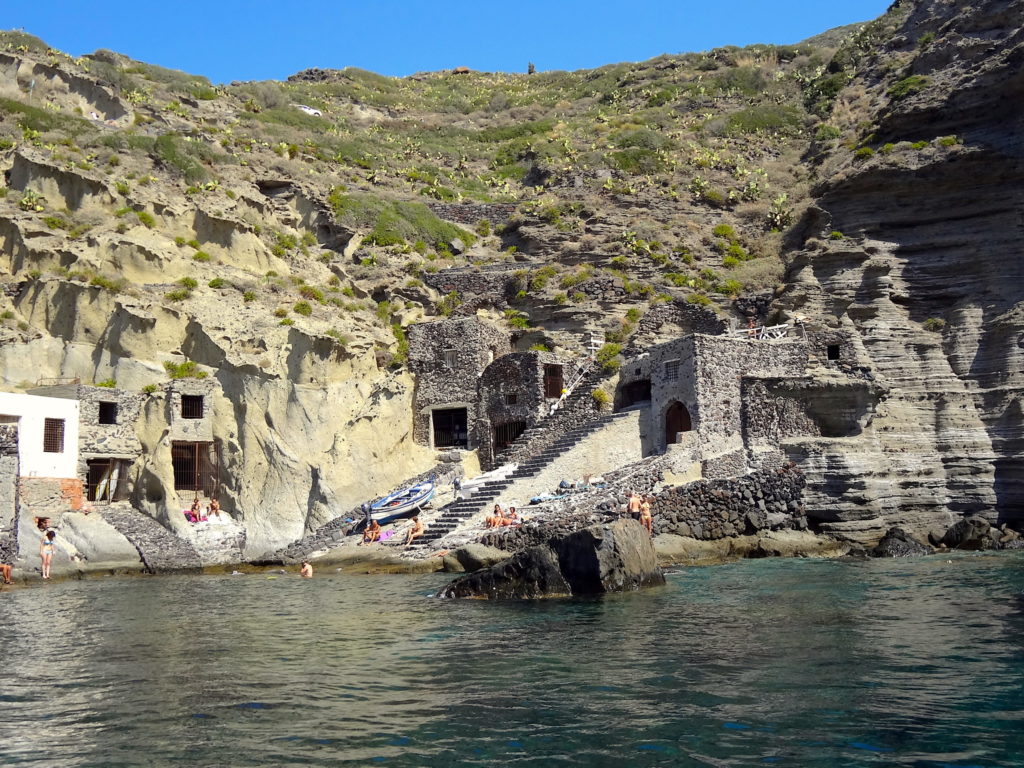 We on Senza Confini received a hammer blow two days before the event when we heard one of the key prongs of our attack, Lourdes, had been
forced to cry off because of her father’s poor health. I can’t remember what the other prongs were but deprived of liver pate and orange marmalade
covered biscuits we never really recovered – yes the five remaining all-male crew struggled manfully (as men do) and had a great time, but it wasn’t
our year for race results.
After all, what can you do with an inch thickness of barnacles on the hull, well OK, a centimetre then? No, it wasn’t our Senza direction! Our
mountaineer Brian represented us by conquering Mt Stromboli while the rest of us were conquering large ice creams in the town square.
Shame on us.
But is there a prize for the highest number of swims in the week? We might well have won that.
Evert and Justin continued our tradition of providing live musical entertainment. Dougie kept telling us how much better the weather would be
in Glasgow (I made that up).
As skipper I was of course fully occupied with deploying the cat o’nine tails; or was it the corkscrew? One or the other anyway.
Thank you Sasha and John too for managing to whistle up enough wind to complete some racing – you get the prize for ‘best seat-of-the-pants
race officer’! 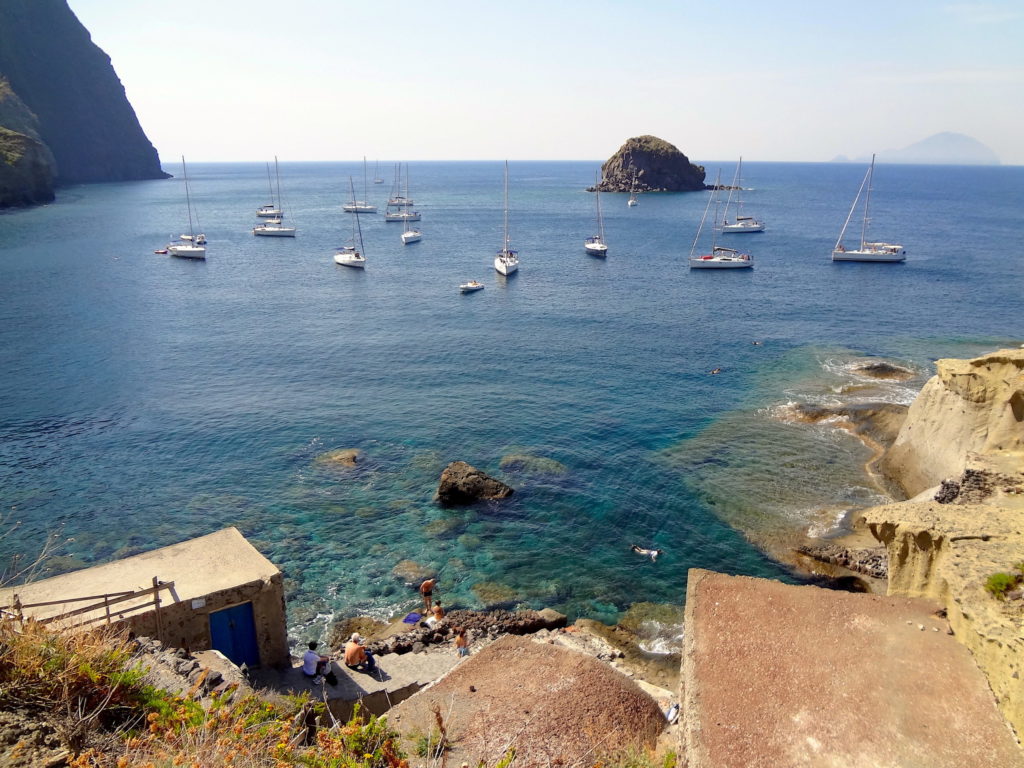 Please check the link below for more information on the High Point Yacht Fest (HPYF 2012) event and other past and current events too: 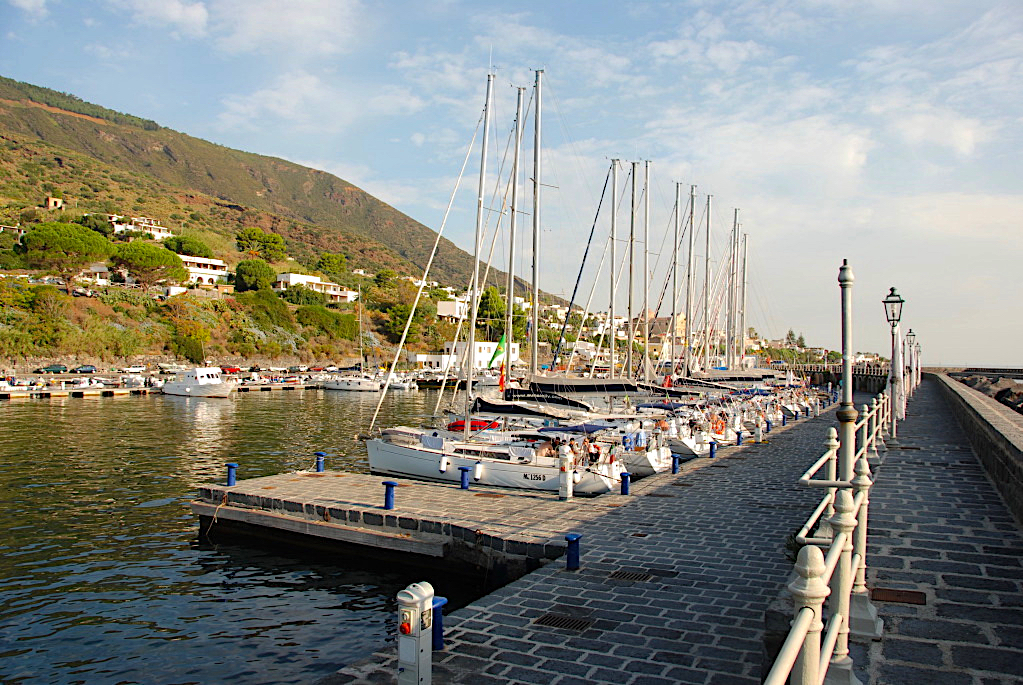